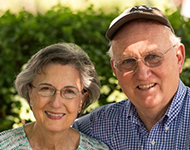 Jack & Cynthia have been helping Christ’s followers "navigate" spiritually for 35 years, coming alongside to support them as they search the Word of God to chart the course of their lives. The hallmarks of their ministry are one-to-one relationships and small-group studies focused on discipleship.

Just as the foundation of a building is essential but unseen, their ministry’s contributions are often played out away from center stage, away from the spotlight’s glare. The U.S. ministry touches lives through everyday settings such as college campuses, military bases, inner cities, prisons, and youth camps, adding to the kingdom for God’s glory.

Jack and Cynthia Heald have been members of Christ Community Church for almost 40 years, after moving from their home in Texas. Jack was a veterinarian and Cynthia was busy wife and mother of 4. They moved to Tucson to be a part of The Navigators. They minister to people in the military, couples in the community, and people in business. Jack had a ministry to sports teams for 38 years also. In mid-2012, they determined that they no longer needed many of the adminstrative services provided by the Navigators, so they moved under the financial umbrella of New Horizons Foundation. This non-profit, tax-exempt public charity allows them to be better stewards of the support they gratefully receive.

Cynthia wrote a bible study for the women of our church, Becoming A Woman of Excellence, which was published and became a part of a series that has been used world-wide in many languages. She and Jack wrote a study for couples: Loving Your Husband and Loving your Wife. They also have opportunities to teach the scripture widely in many countries.